The Smallest Police Station in London

The Smallest Police Station in London

Can You find the Smallest Police Station in London? 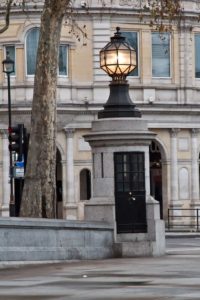 How It Came to Be…

First constructed in 1926 by the Metropolitan Police, the police station was used to keep a watchful eye on the city’s demonstrators. It originally started life as a temporary police box just outside of Trafalgar Square tube station. When the time came to renovate the box and make it a more permanent structure, this was met with public objection. So the idea was scrapped and instead a more secretive police box came to be…inside of an ornamental light fitting.

The concrete base was hollowed out and narrow windows were installed to give a vista across Trafalgar Square, a popular protester site. A police officer could sit inside and have a direct phone link back to Scotland Yard to call for reinforcements in times of trouble. Legend has it that when a police officer picked up the phone, the ornamental light fitting on top of the box started to flash, alerting nearby officers that trouble was brewing.

Today the smallest police station in London serves as a less dignified outpost, being used as a broom cupboard for Westminster councils cleaners!

If you would like to discover some more fun and unique things to do in London, why not try one of our popular Food Tours. On our Traditional English Food Tour you get to see iconic London landmarks combined with the best of British Food. Guests on our Royal London Food Tour sample decadent Royal food in the dining halls of Mayfair and St James as well as having front row seats for the Changing of the Guard.

Next postSecret Food Tours in London | A Unique Eating Experience